Wet weather with light and variable winds to continue in 1st half of Nov 2019. Moderate to heavy thundery showers in afternoon (6-8 days); widespread thundery showers between predawn and early morning (1-2 days). Daily temperature on most days between 24°C and 34°C, with high of around 35°C on a few days.
Fortnightly Weather Outlook for 1 – 15 November 2019

Singapore, 1 November 2019 – The inter-monsoon conditions that have been prevailing over Singapore since early October 2019 are expected to persist into November 2019. In the first half of November 2019, the low-level winds are forecast to be light and variable in direction, and may temporarily blow from the southwest or west on a few days.

2          In the first fortnight of the month, Singapore can expect moderate to heavy thundery showers due to light winds coupled with strong daytime heating of land areas in the afternoon on six to eight days. On one or two of these days, the showers could start in the late morning. In the early part of the fortnight, low-pressure systems developing over the Western Pacific Ocean and the northern South China Sea is forecast to bring a temporary shift in the winds to blow from the southwest or west over Singapore and the surrounding vicinity. This could result in the passage of Sumatra squalls over Singapore, bringing widespread thundery showers with occasional gusty winds between the predawn and early morning on one or two days. Overall, the rainfall for Singapore in the first fortnight of November 2019 is likely to be near normal.

3          In the first fortnight of November 2019, the daily temperature on most days is forecast to range between 24°C and 34°C. On a few days, the daily maximum temperature could reach a high of around 35°C.

6          In October 2019, Singapore and the surrounding region experienced inter-monsoon conditions with winds that were generally light and variable in direction. The monsoon rain band remained close to the equatorial Southeast Asia region, and brought thundery showers over Singapore on most days of the month.

7          During the month, moderate to heavy thundery showers affected Singapore mostly in the afternoon. The showers were due to localised development of thunderstorm clouds under the influence of light winds and strong daytime heating of land areas. On some of these days, there was also strong convergence of winds in the surrounding vicinity and the thundery showers extended into the evening. Overall, the second half of October 2019 was wetter than the first half of the month. On 27 October 2019, following a heavy downpour over many parts of the island in late afternoon and evening, the climate station in Changi recorded a daily total rainfall recorded was 99.2 mm. This is the second record highest daily total rainfall for October at a climate station since rainfall records began 1869. The highest ever-recorded climate station daily total rainfall for October is 139.8 mm in 2013.

10        In October 2019, rainfall was above average over the northern and eastern parts of the island, while for the rest of the island, rainfall was below average. Admiralty recorded the highest rainfall anomaly of 58% above average, while Tanjong Katong, in the southeastern part of Singapore, recorded the highest rainfall anomaly of 73% below average.

[2] A rainfall deficit situation refers to a period of at least three consecutive months with monthly rainfall more than 40% below the climatological rainfall, averaged over the rainfall stations with long term records across the island. 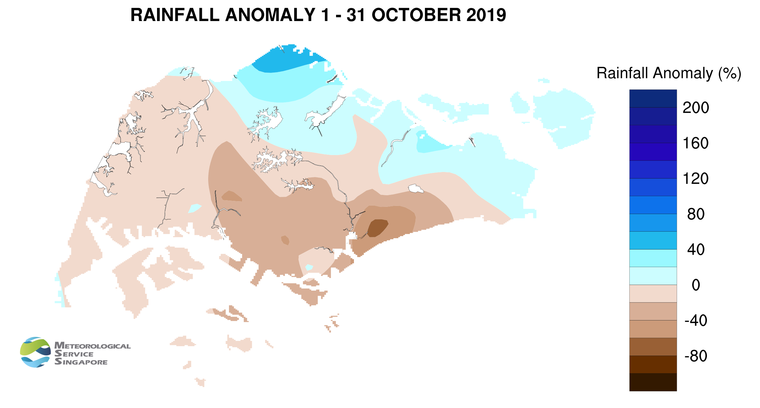