April 2016 on track to be the warmest April on record

Singapore, 29 April 2016 – For May 2016, inter-monsoon conditions are expected to persist over the region. The prevailing low level winds will continue to be light and variable in direction.

2. In the first fortnight of May 2016, short-duration thundery showers can be expected mostly in the afternoon on seven to nine days due to strong solar heating of land areas coupled with wind convergence. In addition, thundery showers with gusty winds due to a Sumatra squall can be expected in the pre-dawn and morning on one or two days. The rainfall for first fortnight of the month is expected to be near average.

3. Climatologically, May is the second warmest month of the year after April. The warm conditions experienced in Singapore in April 2016 can still be experienced on some days in the first half of May 2016. The daily maximum temperatures during this period are expected to range between 33°C and 35°C on most days.

4. Inter-Monsoon conditions prevailed over the region in April 2016, with low level winds generally light and variable in direction.

6. During the review period, the light wind conditions coupled with strong solar heating resulted in the development of moderate to heavy thundery showers in the late morning and afternoon on some days. The thundery showers on 3 and 20 April were particularly heavy with the highest daily rainfall total of 111.4mm and 104.6mm recorded at Upper Pierce Reservoir and Jurong areas respectively. Despite the showers on many days, both daytime and night time temperatures have been significantly high in April 2016. 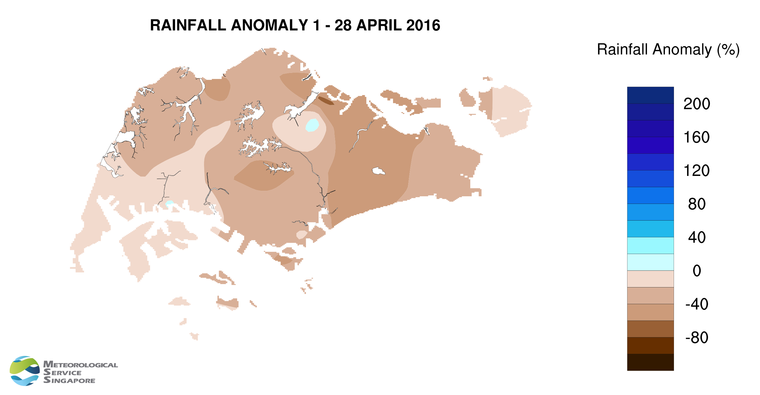